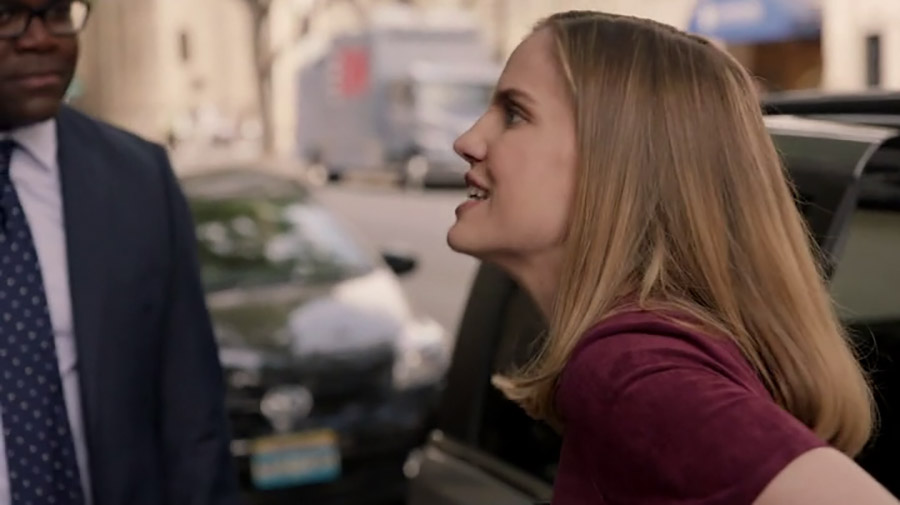 You are not Michael Jordan. You are a seven-foot-seven goony-looking Lithuanian...

Amy, Dan, Jonah and Richard travel to Carson City, Nevada in an attempt to force a judicial recount of the state. Meanwhile, back in Washington D.C., Selina brings in Bob Bradley (Martin Mull), a respected Washington fixture nicknamed "The Eagle", as an advisor. Tom James has been moved aside to his role as the leader of the banking task force, and for some reason he is suddenly agreeable about everything. Selina meets billionaire banker Charlie Baird and suddenly decides he is "spongeworthy", much to the chagrin of Gary. Mike goes on a master cleanse, in an attempt to get healthy before his adopted baby arrives. However, his blood sugar dips dangerously (and humorously). Kent is fascinated by Sue's age, as he perceives she is much older than she appears. After successfully forcing a judicial recount in Nevada, Amy and Dan share a "will they or won't they" moment.

Selina: So figure that out and call me right back. I'm at Walter Reed. I'm meeting troops and shaking (pause) God only knows what.

Selina: Seriously, I'm more Hispanic than she is. You know? Where's she from, Santo Connecticut?
Ben: She summers in Vinyardo Del Martha.

Sue: Chinese hackers have breached White House employee files.
Selina: Maybe they can find out what some of these people are doing.
Gary: Ooh, tell me about it.

Ben: What in the lunatic f**k is the master cleanse? Sounds like Nazi domestic policy.
Kent: Little known fact about the Nazis. Their polling numbers within Germany, through the roof. Unbelievable numbers. (pause) Though also tragic.
Ben: The Jewish demo couldn't have been that good.

Jonah: Genuine crocodile skin. Yeah, I'm gonna be pulling down Clint Eastwood cowboy movie style pussy in these things. Except I'm not the man with no name. I'm the man with mo' game.

Jonah: Can Paul McCartney teach Kid Rock how to be a good songwriter? I mean, that's a bad example. Kid Rock rules...

Selina: How is Susan?
Gary: (whispering) He's divorced.
Selina: Not in jail for what she did to you.

Richard: You should read C.S. Lewis's book on grief. It's not as fun as "The Lion, Witch, and the Wardrobe" series, - but it's still pretty good.

Sue: You have a meeting with Olympic medalists in five.
Selina: Special or normal?
Sue: Well, they seemed normal, but I'll confirm.

Sue: Ma'am, Tom James is here sans appointment.
Selina: Bleh. Can you go tell him to f**k a bag of glass or something?

Selina: Hey, I'm gonna be president, so I can go take a shit in the Rose Garden if I want to.
Ben: We used to call that a Jimmy Carter.

Sophie: What happens in Vegas, it stays in Vegas.
Amy: We're not in Vegas.

Ben: You know, I was over in the East Wing and I saw a painting of Sue holding George Washington's horse.

Dan: Remind me again what it is that you do that's so interesting.
Sophie: I work at CVS.
Dan: Really? CBS? I would love to work at CBS.