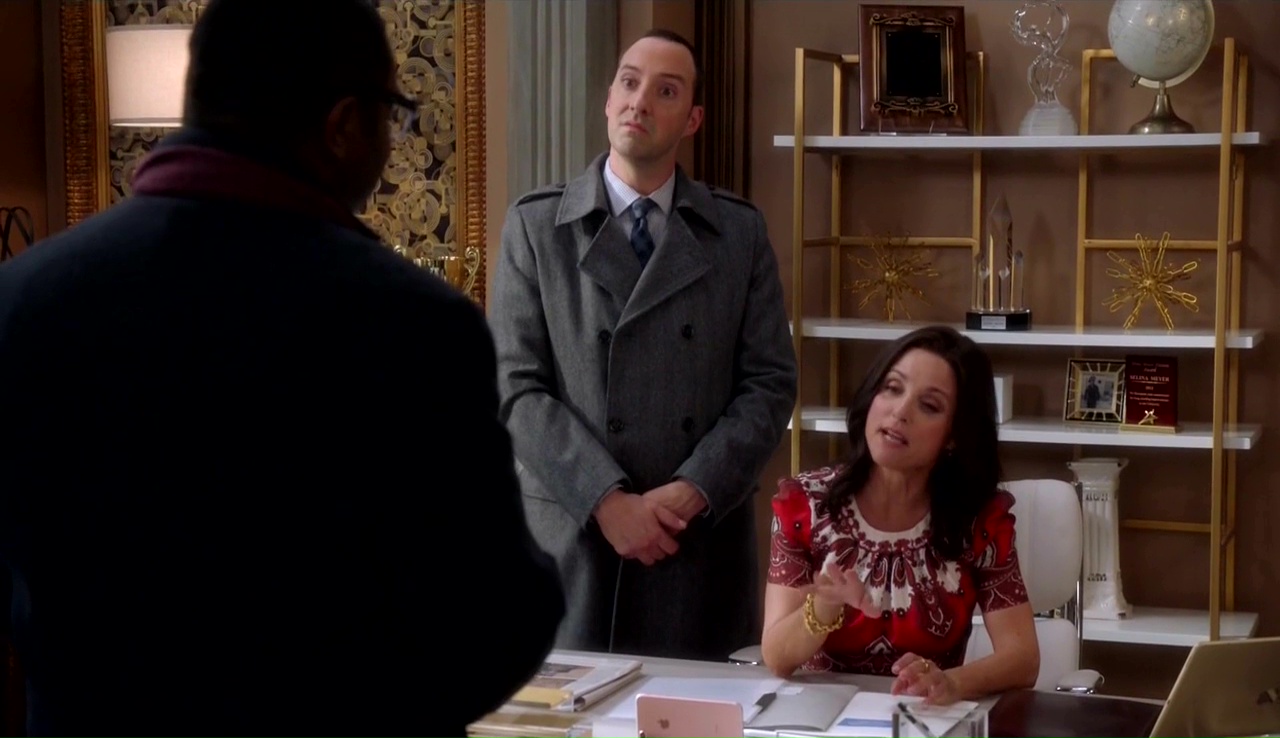 You know what being an ex-president is like? It's like being a man's nipple. People go right by it to jerk off a dick.

One year after losing the presidency, Selina attempts to secure her legacy. Dan tries to ingratiate himself at his new job. Amy's brash D.C.-style personality proves too much for her new co-workers.

Amy: This is a big day, people. Campaign starts right now, because we are going to make Buddy Calhoun the next governor of this dried coyote turd of a state.

Buddy: Reminder Nevada is the Sagebrush State...
Amy: Yeah, so saddle up those emphysema tanks, you inbred cousin-f**kers, 'cause we are going to drag this state into the 20th century. That's right, I said 20th.

Selina: I'm doing my best to help the scholars of the future reckon with the Meyer years.
Dan: Year.

Uber Guy: (to Ben) Here at Uber and in the rest of the world the word Chinaman is considered inappropriate.
Ben: No, no, no. It's okay. My wife is Oriental. All of them have been. I kind of got yellow fev-ah.

Jonah: When I was a kid, I ate sloppy Joes, pizza on a bagel. The only green bean I ate was a green jelly bean and I grew up to be so tall, my stupid mom had to get a different car.

Selina: I've heard she's a complete gash and a half.

Selina: I feel like we're celebrating my frat house gang rape. Except I didn't even get a candlelight vigil.
Gary: I love candles.

Selina: You got to call Wilner at the "Times".
Richard: "Indianapolis Times," got it.

Andrew: I got an unofficial lunch with a potential big foreign donor for the Meyer Fund.
Richard: That could get us into trouble down the line.
Andrew: Senor Ocampo is having trouble nudging his visas through, so I called our friends over at the State Department.
Richard: That definitely will.

Furlong: (to a bald Jonah) A minute of your time, Congressman Powder?

Furlong: Do you know what the chief agricultural product of my district in Ohio is? I'll give you a hint looks like Will's wife's cl*t.
Jonah: Mangos?

Selina: Son of a Sam. Offices in the South Bronx? I can't stand this anymore.
Gary: We should be in the Meatpacking District. It's so chic.

Selina: This is the worst place they've ever stuffed an ex-president, and I'm including JFK's coffin.
Gary: Ooh, I'm gonna get you the same one.

Selina: You know what being an ex-president is like? It's like being a man's nipple. People go right by it to jerk off a dick.

Marjorie: No, sir, ma'am. We can't do anything about AIDS.
Selina: Who are you, Ronald Reagan?

Selina: Get me whoever painted Ambassador Stone's wife and made her look like not a twat.

Buddy: Hey, babe?
Amy: We found a video of a woman who says she did cocaine with Governor Steptoe's wife in college.
Buddy: Wow.
Amy: Hey, Purple Mountain's Majesty, we need to put together an attack ad yester-the-f**k-day, so give me five options from "party girl" to "coke whore for c**k," you know?
Buddy: Oh, you know what? I actually went to high school with Kristin Steptoe and she's a lovely gal, so...
Amy: My guess is if you gave her a rail to snort off your dick, she would let you f**k the hole in her septum.

Jonah: I had to go through six weeks of chemotherapy. All my hair fell out, including my pubes, Dan.
Dan: Come on, you never had any pubes.

Dan: (to Jonah) Jesus, you look like you should be underground worshipping an atomic bomb, you human f**king Pap smear.

Amy: I am not some teased-haired casino cooze who will let you ji** all over her face with a handful of chips.
Buddy: I like that. Keep going.

Selina: I'm so sorry to hear about Uber.
Ben: Oh, God. A bunch of dumb-ass millennials, you know, too lazy to learn how to drive drunk.

Ben: Shlomo Tanz is radioactive. He can read the newspaper on the toilet by the light of his own shit.